Some commentators have noted the obvious connection between the massacre in Paris last Friday and the lunacies on American college campuses that the MSM can no longer ignore.

Most do not get the underlying evolutionary dynamics producing these particular effects and so have no idea about what’s really going on, much less about what an appropriate and effective response might look like.

I wrote about these dynamics in this blog nine years ago after the violent “protests” erupted in various corners of Dar al-Islam (the Muslim world) when the Danish newspaper Jyllands-Posten dared to publish satirical cartoons of the Prophet Muhammad. It was, I asserted, a useful example of a battlefront of the trimemetic war that has become the salient feature of human evolution since the mass emergence of green fifty years ago. This war is a clash of “three blind memes”—amber, orange, and green—that dominate human consciousness today, and struggle against and among one another in ways totally unprecedented in human history.

(I call these memes “blind” because, as Wilber has noted, they are first tier structures and as such blindly assume that their perspectives are absolute and thus that anything to the contrary is a threat to be suppressed.)

Never before have we experienced the co-existence of millions of people whose center-of-gravity of consciousness resides in three distinct waves, all of which are powerfully antagonistic toward each other. This is perhaps simple enough to grasp, but subtler currents are in play that make it much more difficult for most of us to appreciate the complexity of what is unfolding.

It is a product of Wilber’s last great original insight laid out in his work on integral post-metaphysics about the nature of memetic structure. It is, he theorized, more of a LH probability wave than a RH concrete configuration; the longer people operate within a particular structure, the more likely its manifestation will be predictably within a definitive range of characteristics.

Thus amber, which we have been working out of for at least twelve millennia, is the most predictable and stable of the three. Orange, only half a millennium old, is far less stable, and green, only a half a century old, is still all over the place. Since the Integral Model posits that each emerging wave transcends and includes all earlier waves, the degree of stability of these earlier waves will significantly influence how quickly the newer waves will solidify into predictable patterns and thus in turn become susceptible of the next transcendence.  Conversely, the more stable the structure, the more influence it has on later emergent waves.

What has become clear to me as I’ve dug deeper into my interior is how relatively unstable orange still is, and how this falling-short-of-maturity so powerfully impacts green.

Orange is the locus of the emergence of individual identity from the tribal. Its gifts have been numerous and unprecedented: liberation from the tribe manifests in, among other things, liberation from social and economic stagnation. Once orange established itself in northwestern Europe and America, global per-capita wealth, health, and longevity exploded. But its shadow has harbored amber jealousy, which results in self-sabotage, seen individually in violent self-denigration and socially in acts of terror committed by both state and non-state actors.

This dynamic began almost simultaneously with the mass emergence of orange; the French invented state terror during their revolution against the ancien régime at the very beginning of the modern age, thus establishing the pattern that has played out again and again since, mostly recently just a few days ago at the Bataclan and other locations in the City of Lights.

From the tribal perspective, individuation can appear as a death threat. If a member of the tribe no longer needs it, then the very social cohesion that binds the tribe together is absolutely and eternally rendered obsolete. Islam, as I have written elsewhere, is one of only two major religions explicitly and consciously established to promote and support a particular tribe (Judaism is the other); it is a gloriously and permanently premodern creed. It established and disciplines the Dar al-Islam as a self-conscious society explicitly distinct from and superior to the Dar al-harb. As such it is impervious to the kinds of evolution that Christianity made room for; to “modernize” Islam would be to kill it off.

That is not to say that, politically, Muslim cultures cannot find a way to live with modern and postmodern polities; it is to say that this accommodation will only be practical and not fraternal in nature. It is also not to say that Muslim cultures do not struggle with the temptations of modernity; they do indeed and, with the exception of Turkey and Tunisia, the modi vivendi reached by various Muslim nations have reached differing levels of mass tolerance.

It is, as many in the West have rightly noted, a significant global challenge. But few appreciate that it is primarily the product of combined and uneven evolution of consciousness. The majority of us—almost 80%—still live in cultures whose center of gravity is in amber, but all of these have been irrevocably impacted by modern orange-centered cultures.

At the same time, the enormous inertia of amber as the most stable of all predominant levels of consciousness equally and less obviously impacts orange and green. We can understand this best perhaps by looking at how it affects us in the Advanced Sector as individuals, appearing as neurosis, addictive compulsions, and other forms of psychospiritual self violence. These are the result of emotional trauma that all humans in post-amber cultures experience in the first three years of life as the infant begins the arduous task of differentiation and individuation.

Few of us get through this process unscathed. We perforce interact with all the unhealed trauma living in our parents’ subconscious with no way either to understand what is happening or to determine the healthiest way to navigate the unsettled state our bodies and brains experience. We merely react to defend ourselves as a matter of survival; the structure of this defense mechanism automatically becomes the default mode of our self conception for the rest of our lives, unless by grace we become sufficiently aware and take steps to complete the healing we could not command in those early days.

These “mind parasites,” as Robert Godwin calls them in his excellent One Cosmos under God, result because, as we continue to grow into childhood and adolescence, this painful experience remains repressed in our subconscious, still in need of total healing. Fully mature individuals get there because they have been able to transcend, include, and integrate all the earlier levels. The degree to which integration has not occurred determines the thoroughness with which we occupy all later levels.

Remembering Wilber’s observation that the cultural center of gravity draws its children to that level while obstructing those that seek to transcend it, we can appreciate the bind that most of us find ourselves in when, having reached our forties we still have a difficult time finding peace and equanimity within. We are drawn through the stages of development even if we haven’t completely integrated them on our way, stuck with whatever underdeveloped or traumatic material we encountered.

Since ontogeny recapitulates phylogeny, this same dynamic plays out in our collective consciousness. Even as the Advanced Sector’s center of gravity of consciousness is now in orange-leaning-into-green, we all experience the unhealed trauma of the shift from amber to orange without awareness of the activity of collective mind parasites.

Green brings an entirely new category of challenges. It transcends orange’s innovation of individual identity by the new awareness that all humans are capable of and entitled to our individual self-identity and dignity. But because it inherits both amber’s rebellion against orange and orange’s unhealed traumas along, its ability to act upon this awareness is severely distorted, resulting for the most part in the variant that Wilber has called “Boomeritis.”

We see this reflected politically in the postmodern socialist (or self-identified “anti-capitalist”) tendencies that bring amber religious certainty to green insights and thus seek to impose a green-tinged amber order upon the globe. Nowhere is this more pronounced than in the prognostications of the left about the global climate. Green consciousness produces awareness of the interrelationship among people, economic activity, and the environment; amber consciousness produces a top-down formula for social organization to achieve a mythical global temperature, even if it involves the violence of forced CO₂ emissions reductions.

We also see it in the nasty thought control tendencies at US universities coming into public awareness recently. The postmodern ideology that divides us into victims and oppressors is a genuine amber perspective, hijacking green’s authentic insights about the equality of human dignity and turning into a Western version of jihad.

The recent superciliousness at Yale, the University of Missouri, and other campuses, reflecting the violence inherent in the victim studies worldview, will only grow more acute as this amber perspective collides with the orange defense of individual liberty and dignity and the green insight of the universal applicability of orange’s innovations. The violence that characterizes Islamist jihad against modernity is the offspring of the same dynamic—amber’s rage against the blasphemy of orange individuation. It’s the gods’ revenge against Prometheus acted out yet again.

Thus the trimemetic war has the feel of bellum omnium contra omnes, of a chaotic if not catastrophic disintegration of the foundations of social certainty that has birthed Beelzebub’s demon children. It recalls the great modern artist Francisco de Goya’s chilling 1797 etching “The Sleep of Reason Produces Monsters.” 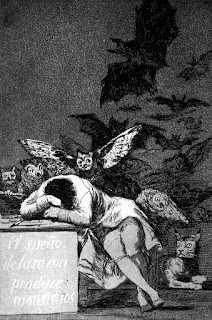 These monsters are the demands of the mythic for all humans to conform to our tribal roles, the only way to guarantee that the tribe will survive in our dangerous world. That our times might feel like this is the result of green’s incredible and understandable immaturity as a new wave of consciousness. It does not yet embody the gravitas of its powerful and compelling improvement of orange, and thus has at least temporarily been hijacked by the subconscious amber rebellion against orange. It is a sad irony that, for the most part, it has been turned against the truth its emergence came to tell; yet this condition is no different from orange’s so far incomplete transcendence, inclusion, and integration of amber.

We cannot know how temporary the Boomeritis pause of green’s development is. We have never before experienced trimemetic turbulence. We could be on the doorstep of amazing and breathtaking breakthroughs, or of a long and dismal new dark age.

It is a sign of our alienation from our authentic experience that we find ourselves compelled to engage in systematic acts of self violence, from addictions and incivility to beheadings and bombings. The rage that we keep the lid on is individually and collectively the key to the peace that surpasses understanding.

The good news is that we humans have discovered the yoga to access and recreate this; it's the same mechanism we employed to create the chaos out of which it is emerging in the first place. We manifest the world we want; let us now resolve ourselves to do the serious and grueling work of vulnerability and healing so that the world we want offers the best of what we know is possible while still cherishing our defects and imperfections. The irony is that the only way to peace is to embrace the war within. Until then, we will keep sowing and reaping the whirlwind.

Marty Keller
Having bounded past the big 7-0, I am a native of the Detroit area. Graduated from the University of Michigan in 1973, and have had at least ten different careers since then. Came to California in 1983 and completed my Masters Degree in Consciousness Studies at JFK University in 2004. Have always had a compelling interest in our political system, with a special devotion to the example of Abraham Lincoln as the quintessential American statesman. Recently completed 12 years of state government service, and 20 years in the Unity movement, now serving as Principal Speaker at Capital City Unity.